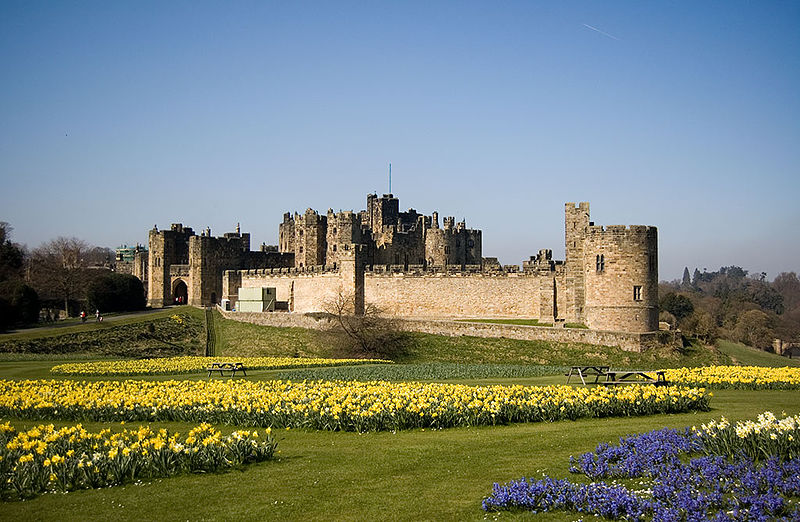 Alnwick Castle guards a road crossing the River Aln.[4] Yves de Vescy, Baron of Alnwick, erected the first parts of the castle in about 1096.[5] Beatrix de Vesci, daughter of Yves de Vescy married Eustace Fitz John, Constable of Chestershire and Knaresborough. By his marriage to Beatrix de Vesci he gained the Baronies of Malton and Alnwick. The castle was first mentioned in 1136 when it was captured by King David I of Scotland.[6] At this point it was described as “very strong”.[4] It was besieged in 1172 and again in 1174 by William the Lion, King of Scotland and William was captured outside the walls during the Battle of Alnwick.[7] Eustace de Vesci, lord of Alnwick, was accused of plotting with Robert Fitzwalter against King John in 1212.[8] In response, John ordered the demolition of Alnwick Castle and Baynard’s Castle (the latter was Fitzwalter’s stronghold),[9] but his instructions were not carried out at Alnwick.[10]

The castle had been founded in the late 11th century by Ivo de Vesci, a Norman nobleman from Vassy, Calvados in Normandy. Descendent of Ivo de Vesci, John de Vescisucceeded to his father’s titles and estates upon his father’s death in Gascony in 1253. These included the barony of Alnwick and a large property in Northumberland and considerable estates in Yorkshire, including Malton. As John was under age, King Henry III of England conferred the wardship of his estates to a foreign kinsmen, which caused great offence to the de Vesci family. The family’s property and estates had been put into the guardianship of Antony Bek, who sold them to the Percys. From this time the fortunes of the Percys, though they still held their Yorkshire lands and titles, were linked permanently with Alnwick and its castle and have been owned by the Percy family, the Earls and later Dukes of Northumberland since.[11] The stone castle Henry Percy bought was a modest affair, but he immediately began rebuilding. Though he did not live to see its completion, the construction programme turned Alnwick into a major fortress along the Anglo-Scottish border. His son, also called Henry (1299–1352), continued the building.[12]The Abbot’s Tower, the Middle Gateway and the Constable’s Tower survive from this period.[11] The work at Alnwick Castle balanced military requirements with the family’s residential needs. It set the template for castle renovations in the 14th century in northern England; several palace-fortresses, considered “extensive, opulent [and] theatrical” date from this period in the region, such as the castles of Bamburgh and Raby.[13] In 1345 the Percys acquired Warkworth Castle, also in Northumberland. Though Alnwick was considered more prestigious, Warkworth became the family’s preferred residence.[14] 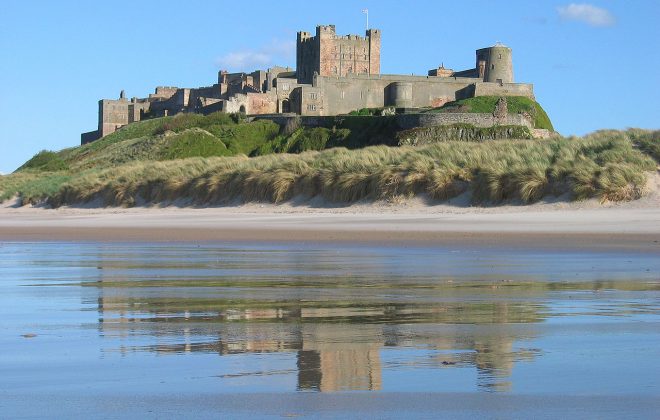